Cameron Heyward got a heavy fine for outburst 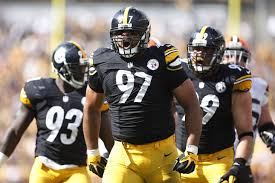 Steelers DE Cameron Heyward’s football betting fans were very upset to learn that the player will receive a fine of $22,050 after he had an outburst last Sunday against officials in his team’s game against the Buccaneers.

The player has the backing of coach Tomlin, but many fans can see that this won’t keep him from being penalized due to unsportsmanlike behavior. Last Sunday, Heyward had an argument with officials when Pittsburgh was defeated 27-24 by Tampa Bay at home. The player said that LB Sean Spence was held in the third quarter on a 3-yard TD run by Doug Martin, in a play that is widely talked about, and seen as very controversial.

Earlier during the week, Spence said that if a hold didn’t happen, he would have been quick to stop Martin before the end zone.

“That was a missed call and it was crucial because it would have taken points off the board,” said Spence. “It didn’t, so we just have to continue to play the next play.”

Mike Tomlin, Pittsburgh coach, was not very happy at all about his team getting 13 penalties for 125 yards on their game last Sunday against the Bucs, and he backed the outburst that Heyward had.

“If I had been on that side of the field, they probably would have penalized me,” said Tomlin.

“Everybody in the stadium thought there was a holding on the play but it wasn’t called. That’s understandable. Some of the other [penalties] we have to channel our enthusiasm and energy in a more positive way.”

Football betting fans learned that WR Antonio Brown also received a penalty due to unsportsmanlike behavior in the game against Tampa Bay. The player fell straight to ground while he was celebrating his game’s first TD catch. RB Le’Veon Bell was also given a penalty due to taunting after his run of 16 yards.

Pittsburgh fans know how problematic Heyward’s outburst proved to be, and hope that things settle down for the player and the team as soon as possible, as the most important thing for them to right now would be to focus on their game.