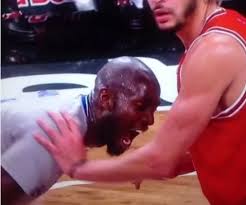 On Sunday, many fans and live betting services were surprised when they saw Kevin Garnett try to bite center Joakim Noah in the Bulls’ game against the Nets, where Chicago won 102-84. Noah was also in a state of disbelief, and couldn’t even believe that that the player tried to take a bite out of his fingers, even if it was just a joke.

“I know how to bite somebody,” the center told the media in his team’s locker room. “Obviously I was messing around in that moment. If I wanted to bite him, I’d have just … shout out to Mike Tyson.”

Was this the most insane thing that a player ever tried to do to Noah on the court?

The future Hall-of-Famer dismissed suggestions that a message was trying to be sent by Garnett. Both players took verbal hits at each other since the time that Garnett played with the Celtics, and the fans know that’s it’s been a long time already that both players went at each other. Garnett was given a technical foul in the game’s first half after elbowing Noah.

“If somebody tries to bite you I think it’s a little bit more than trying to get in your head,” said Noah. “I don’t know, but it’s pretty amazing.”

However, it’s pretty clear that they both have plenty of respect for each other.

“He’s a competitor, I’m a competitor,” said Garnett. “We’re banging … it is what it is. Every time we’ve played, there’s always something. But I respect the guy, respect the Bulls … everybody over there. I respect everyone in this league.”

And live betting services can see that Noah is having fun knowing that he has a clear advantage over Garnett at this stage of his career in the NBA.

“I have fun playing against him when we win,” Noah said. “We’ve been doing some winning against him lately so I know how competitive he is and I know it drives him crazy to lose like that so we just got to keep doing what we’re doing. I’m not worried about Kevin Garnett, I’m just worried about us. Just staying healthy and getting better, that’s really all I care about.”