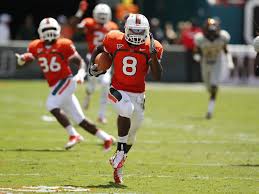 Duke Johnson, tailback for the Miami Hurricanes who’s very well-known with pay per head services for his skills on the field, stretched his 100-yard game streak, making it to six, and the player scored a TD for his ninth consecutive meeting. However, the team ended up losing 30-26 to the Florida State Seminoles, to the disappointment of many fans.

In the game’s first half, the Hurricanes were leading by 16 at one moment, and at halftime they led by 13. However, in the game’s last 41:37 they were only able to score three points, and one of them was a field goal made with 11:01 remaining in the matchup.

On 15 carries in the first half, Johnson was able to record 59 yards and a TD, and nine yards was his longest run. On 12 carries in the game’s second half, the player recorded 71 yards, which include a run for 28 yards, and on 27 carries he was able to finish with 130 yards. The amount of carries turned out to be his career’s third-highest, and this season it was only the third time that he went for over 20.

Maybe he would have had more carries to his name, but the player and coach Al Golden said that in some moments in the second half, he was suffering from cramps.

For 37 yards, Johnson was also able to make four receptions, which meant that the player made touches on 31 of the Hurricanes’ 74 scrimmage plays.

Brad Kaaya, QB for the Hurricanes, was 16 out of 34 for 316 yards with and an interception and two TD’s. Many fans were very hopeful when they saw that the player did a very good job on the field in the game’s first half, as he was able to complete 10 out of 17 attempts for passes for 240 yards and two TD’s, but in the second half, pay per head services saw that he was clearly struggling.

Many fans saw a very intense game between the Hurricanes and Seminoles, and hope to see more action like this in the remainder of the season. Hurricanes fans were not very happy ta all after their team’s loss, but were delighted with Johnson’s accomplishment, and hope to see him continue this way on the field.