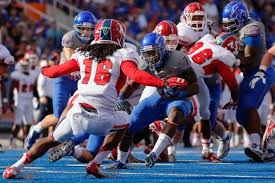 On Friday night, Boise State will face Fresno State at Bronco Stadium in a MW Conference game that many football betting fans are eagerly anticipating.

The Boise State Broncos are currently at a very impressive 12-1 ATS in the team’s last 13 games with the Fresno State Bulldogs, even though they only went 3-13 ATS in their last 16 games played at home against opponents in the conference.

Boise State’s betting line opened with the Broncos being the favorites by 16 points at home.

The Bulldogs are 6-2 ATS in the last eight games on the road against opponents in the MW, with one loss suffered last Saturday when they faced UNLV on the road. Fresno State ended up losing 30-27 in overtime to the Rebels, but almost bounced back for a win with a very solid display during the second half that saw them beat the home team 27-10.

In the loss, Brian Burrell, Fresno State QB, played in one of his season’s best games, as he was able to throw for 310 yards with two interceptions and three TD’s.

Fresno State was able to win their past three meetings both ATS and SU after a 0-3 ATS and SU start to the season.

The Broncos were able to dominate the Bulldogs when they faced them at home, but still had problems covering the spread when they took on other teams in the conference. Boise State went 3-1 ATS in the team’s last four games at home overall, but didn’t play a game there since a month ago, when they beat Louisiana-Lafayette at 34-9 as the favorites by 17.5 points.

The Broncos played three of last four meetings away, which include last week’s 51-46 win over Nevada as the favorites by three points.

Grant Hedrick, Boise State QB who football betting fans know can be a real threat on the field, was able to throw for 346 yards against Nevada, with one interception and two TD’s. In the meantime, RB Jay Ajayi had a total of three TD’s and 152 rushing yards.