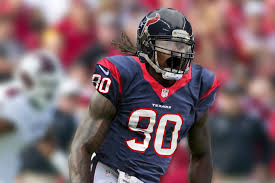 Jadeveon Clowney’s football betting fans were very troubled when they learned that the defensive linebacker had no choice but to leave the Houston Texans’ very first game of the regular season due to a knee injury, and many experts would like to see what’s next for the player.

Clowney’s knee was injured in the first half of the game against the Washington Redskins, leaving many fans very concerned that the team lost one of their most important players.

The Texans then said that the defensive lineman would end up missing the rest of the game against the Redskins due to the knee injury. It is not clear when in the first half the player sustained this injury, but many fans hope that it won’t seriously affect the team’s performances in future games, especially if he won’t be able to feature for Houston.

The Houston Chronicle said the 2014 NFL Draft’s No. 1 wasn’t rushing in the play where he suffered the injury. The rookie jumped right on a play and then his fans were very worried when they saw him go down the wrong way.

These past few months have not been easy at all for Clowney, something that many football betting fans could clearly see. They remember that in June, the player received surgery for a sports hernia, and now they fear that this recent injury could seriously set him back during the season, and they hope that this doesn’t happen, as they know that he’s a key asset to the team.

This week, the player also said that in the middle of August he suffered a concussion while the Texans were practicing with the Denver Broncos. NFL fans know very well that this type of head injury should never be taken lightly at all, and Clowney’s case is no exception.

NFL fans hope that Clowney’s injury won’t prove to be a very big blow for the team, but many of them are confident that he’ll make very swift recovery and return to action for the Texans soon enough.