Jo Jo Dan believes that he can take out Kell Brook 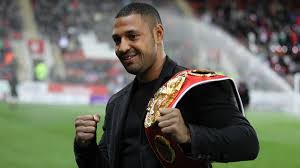 Jo Jo Dan had something to say to Kell Brook, as he told him that he would take away his IBF world welterweight title when they face each other in Sheffield on the 28th of March at the Motorpoint Arena. Pay per head wagering companies know what a huge clash this could prove to be, and would like to see what will happen in the ring when these fighters face each other.

Brook is set to face a heavy punching Dan and defend the title that he got when he beat California’s Shawn Porter in a clash back in August.

Brook is looking to have a major clash during the summer as he wants to seal his reign over the 147lb division, but Dan – 31-year-old Romanian based in Canada – has different plans.

“Kell has not fought anyone like me,” said Dan. “I believe in myself and I don’t think he can bring anything I can’t deal with on fight night.

“I am on schedule with my work and I will be in top shape on March 28. I saw his last fight where he won the world title and it was a great performance, but I just let my team study him in depth and come up with a winning strategy.

“I want us to put together a super fight for all boxing fans. We both train and aim for the win, so the fans should expect fireworks.

“I have waited a long time to get a world title shot so I am determined to take advantage of this opportunity. My prediction for the fight is simple – Jo Jo Dan becomes the new IBF welterweight world champion.”

The fight that Dan is set to have against Brook is just part of a very big boxing night in Sheffield, as Adam Etches, who’s the favourite at home, is getting ready to put his own IBF international middleweight belt on the on the line when he takes on Sergey Khomitsky, in another highly anticipated showdown, and Gavin McDonnell is set to face Oleksander Yegorov of Ukraine to try and clinch the empty European super-bantamweight title, and many fans would like to see if he’ll accomplish his mission.

Boxing fans are looking forward to plenty of action on March 28, and pay per head wagering companies wonder how all of these fighters will perform when they hit the ring.