Lane Kiffin will return to the Tide as their OC 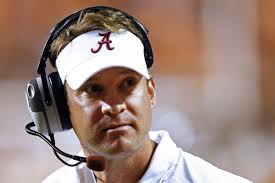 On Saturday, the University of Alabama announced that Lane Kiffin, who according to reports was a potential candidate to get the 49ers’ OC role, will go back to the school next season as the Crimson Tide’s offensive coordinator, something that bookmaker software services believe should give many fans plenty to celebrate.

“We’re very pleased and happy that Lane is going to be staying here at the University of Alabama with us,” said coach Nick Saban on Twitter, and many fans following the Tide where very relieved when they learned about this. “He’s done a fabulous job and is one of the finest offensive coaches in the country. He is going to have plenty of opportunities in the future and we want to continue to help him develop as a coach so when he leaves here, he’ll be in a very good situation. Our offense was extremely productive last season and we look forward to building on some of the good things we did on that side of the ball with this year’s team.”

Football fans all over the country were very impressed when they saw that this last season, while he was playing under Kiffin, Blake Sims, first-year starting QB, was able to complete 64.5% of his passes made for 3,487 yards, as well as 28 TD’s. WR Amari Cooper turned into a finalist for the Heisman Trophy, as he caught 124 passes (a single-season record in the SEC), recording16 scores, as well as 1,727 yards.

As a team, Alabama were 16th place in PPG, with 36.9, and many experts saw that they were very effective last season, even though they could definitely improve, especially with Kiffin’s return.

“After being here for a year, I can see why this is such a special place in terms of the history, tradition, and how much football means to everyone at Alabama,” said the OC in a statement. “I also have learned so much in the time I’ve spent with coach Saban and really have a better understanding of what makes him the great coach that he is. I think the more time I can spend learning from him, the better coach I will be in the future.”

Fans everywhere, especially those who follow Alabama, know that Kiffin is a key part of the Tide, and bookmaker software services hope to see him help lead the team to many wins next season. Perhaps there are some disappointed NFL fans out there, but Alabama seems to be the best place for him for now.