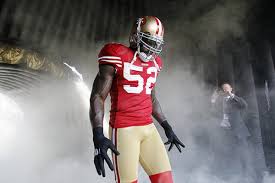 The season is over for 49ers LB Patrick Willis, as the player will need to get surgery on the big toe of his left foot due to a muscle strain, and online bookmakers would like to see how his absence could affect the team.

On Tuesday, the player was put on the team’s season-ending IR list due to the injury that he suffered on October 13 during the third quarter of San Francisco’s game against the Rams.

In his career, Pro Bowler Willis wasn’t able to feature in only six meetings during his career in the league before this injury. This season, the player recorded one interception and 34 tackles for the 49ers.

The player is the leader and a captain of a San Francisco team that in each one of the last three seasons was able to make it to the championship game of the NFC.

“We haven’t lost him in the locker room,” said LB Michael Wilhoite. “We’re still all together here. It hurts but at same time we need to keep going out and win games.”

Willis was hoping that the injury that he suffered wasn’t serious enough to put him in the sidelines for a long time. Last week, he was unable to participate in practice after being limited in action the week before.

After Willis was resting through the bye on October 26, he returned as part of San Francisco’s fully active squad when practice started on October 29, but was mostly limited to working by himself.

Many experts consider this to be a big loss to one of the top defenses in the league, even though on Sunday San Francisco should get back the services of Aldon Smith when they take on the Giants in a road game.

This week, Smith is ready to practice after the NFL gave him a suspension of nine games due to league violations involving personal conduct, as well as substance abuse.

There’s also the possibility that LB NaVorro Bowman will be given the green light to start practicing this week, which would open a window of 21 days so he can be activated or placed on the IR list.

Bowman is recovering from surgery on his left knee after he tore the ACL and MCL last January in a very ugly injury when the team lost to the Seahawks in the championship game of the NFC.

Willis’ place was taken by Chris Borland, and the player did a great job, as he was able to record 18 tackles when the 49ers were beaten by the Rams a couple of weeks ago, then 17 more tackles were added in an win on Sunday against the Saints in overtime.

Online bookmakers saw that the NFL Network first reported that a procedure on the player wouldn’t be necessary.

RB Alfonso Smith was signed back by the 49ers to take the place of Willis on the team’s roster, and LB Shayne Skov was added to practice.