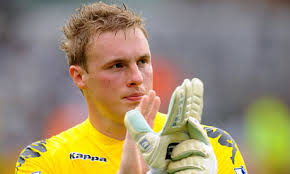 Pay per head services can see that David Stockdale, Fulham goalkeeper, really wants his side to leave the Premier League relegation zone and finally reward their fans.

For the last seven matches, Fulham were at the bottom of the table, but pay per head services saw that they narrowed the gap to safety to only four points after a 1-0 victory on Saturday over Newcastle United.

Stockdale, who was recalled in goal in place of Maarten Stekelenburg, said that they were inspired by pictures of fans stuck on the wall of the dressing room put up by Magath, and pay per head services believe that this was a very good move by the coach.

“The manager didn’t need to say too much to us before the game – we had pictures of fans on the dressing room walls, and a few other bits and pieces, to remind us what we’re fighting for,” Stockdale said.

“I took a good look around because it was a reminder of the good times we’ve had in the six years I’ve been here, and a few of us who have been at the club a while – Brede Hangeland, me, Steve Sidwell – agreed, ‘This is what we’ve got, this is who we’re playing for.’

“You don’t walk into a changing room every day and see pictures of fans staring down, but they all wear the badge with pride and we know how much Fulham means to them.

“The manager deserves credit for the pictures, and putting us through new things and schedules.

“As a certain midfielder at the club told me last week, it’s not just the badge on the front of the shirt we’re playing for at the moment – it’s the badge on the arm which says ‘Premier League’. That’s when it really hit home to me how important it is for us to stay up.”

Pay per head services know that next weekend, Fulham face an intimidating trip to Manchester City, but in their run-in they have key matches against fellow strugglers Norwich City and Crystal Palace.