Pay per Head: Khan eager to beat Collazo and take on Mayweather 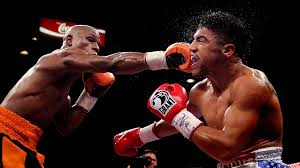 Khan was out of the ring for over a year as he was chasing a fight with the undefeated American, but price per head services saw that he had no choice but to settle for a clash with Collazo on the undercard of Mayweather’s showdown with Marcos Maidana.

While the 27-year-old Bolton star who’s very famous with pay per head services is aware of the danger of complacency when taking on the very dangerous Collazo, the former two-time world champion is keen to use the showcase to prove that he’s the fighter who will put Mayweather’s supremacy to an end.

Khan said at the final pre-fight press conference: “As long as I put on a great performance I’ll earn that shot [at fighting Mayweather].

“But, to be honest, I’m not looking past Collazo. I need to win this fight and take it from there. I need to put on a good performance and we’ll see what happens.

“It’s going to be a hard fight. It will be tough and exciting, but I think I have all the tools to beat him.

“He’s coming off a big win so I know it won’t be an easy fight. I’m looking to make a big statement on the Mayweather undercard.”

Pay per head services saw that there were raised eyebrows when Khan said that Collazo would be his first opponent at welterweight – but the Olympic silver medalist believes that he is well prepared under Virgil Hunter, his new trainer.

He added: “I’m excited to put on a great show. I’ve trained my way up to this weight. The hand speed and movement is always going to be here but there are a lot of new things you will see.

“I’m going to put on a great performance and I hope we give the fans what they want. Spending this time with Virgil Hunter has only made me a better boxer.

“I’ve been working hard and improving myself. It’s not like I’ve been taking time off. I’ve been sparring and working on my style.”