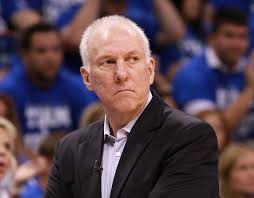 Before the Super Bowl took place, there were talks on Twitter saying that Gregg Popovich’s attitude towards reporters – which live betting fans know is not always cooperative – can be compared to RB Marshawn Lynch’s problems with the media. But in an interview, Popovich – who since 1996 was coaching the Spurs in the NBA – said that when it comes to getting along with the media, he is much different than the controversial NFL player.

“The only time I’m uncooperative is the end of the first or third quarter,” said Popovich. “Other than that, I do interviews and laugh it up with everybody all the time. I just have a philosophical difference with the NBA, and I let them know it every time. But that’s like 1 percent of the interviews that I do.”

The coach does not like to be do interviews within a game. He said that there’s enough TV access to teams when a game is taking place – with cameras during timeouts, coaches with microphones, etc. – for the networks to not take any time away from the coaches, and many fans believe that Popovich might have a point.

“I said, ‘I’m supposed to be setting the defense and offense to start the next quarter, and I can’t do my job because I’m doing this inane deal with whoever is asking me a question,’ ” said the coach. “The questions are unanswerable. It’s like, ‘That quarter, you got killed on the boards. What are you going to do about it?’ ‘Well, I’m going to conduct a trade during timeouts.’ Or, ‘I’m going to ask them nicely to do a better job on the boards.’

“The questions just demand a trite quip, or something, so I just say, ‘You know, it just puts everybody in a stupid position.’ And (NBA officials) listen to it, and then they go, ‘Yeah, well (blabbering).’ And then they don’t do anything about it. So I just do what I do.”

Popovich is not backing down from his struggle to keep interviews away from games when they are being played.

Although many NBA fans and live betting services found Popovich’s comparison to Lynch somewhat amusing, they were paying close attention to what he had to say, and know that interviews within a game can keep the players and coaches distracted, so perhaps it is a good idea to at least moderate how much the media can be involved when games are taking place.