Doug Marrone was not pleased at all with Watkins trade 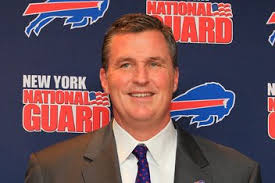 Last May, not everyone at Buffalo was very happy when the team made a trade to acquire the services of WR Sammy Watkins. Online bookmaking agents could clearly see the controversy in this, and saw that the coach was not very pleased by this move.

Sources in Buffalo’s draft room reported that Doug Marrone, former head coach for the Bills, was upset when the trade was made.

According to sources, Marrone didn’t want to see the Bills give up to the Browns a future pick in the first round, in what was a trade where a QB was not involved.

According to sources, Marrone, who made the decision last week to leave the contract that he had with the Bills, is scheduled to have a meeting with the Jets on Sunday, as they’re seen as being the favorites to hire the coach.

Sources also reported that after the interview that took place with the Jets, the coach had a meeting on Monday with the Falcons. The Bears were also calling him, even though an interview with the coach still wasn’t set up.

In 2015, Buffalo traded to Chicago the ninth overall pick and the first as well as the fourth round picks so they could advance to the fourth placed pick in order to choose Watkins for the team.

Even though he had various injuries as a rookie, the player impressed many fans when he caught the ball 65 times for 982 yards with six TD’s while he was playing in all of the 16 meetings for Buffalo, turning into a great asset for the team. They are now 9-7, and Buffalo have a winning record for the very first time since the season of 2004, something that gives many fans plenty of hope.

Not everybody was pleased with the Bills acquiring Watkins’ services, but the player was able to help the team, and there many fans and online bookmaking agents who believe that he continue to be a very important part of the team if he stays there.