Everton should get a big boost with Howard’s return 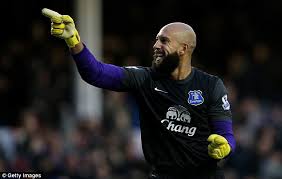 Roberto Martinez, Everton manager, said that Howard could return to action sooner than expected after the player suffered an injury to the calf, and sportsbook software services are very excited, as the player could hit the pitch again as soon as next month.

The US international was on the sidelines after he pulled out at half-time from the team’s Boxing Day meeting with Stoke City. The football world was very concerned about the player’s injury, but they were relieved to learn that his return is anticipated – and very soon.

“We are still working within those six to eight weeks since the injury happened but he is progressing extremely well and probably a little bit ahead of what we predicted.

“We are now going to carry on treating him based on how he feels each day.”

The Spanish manager believes that the trip to Qatar proved to be of great benefit to several players who were being treated. Sylvain Distin and James McCarthy could again return to action when Everton goes to Crystal Palace, in a game that is eagerly anticipated by fans around the world.

The manager said of the players: “It was a chance to regenerate the bodies. We saw Darron Gibson adapting well with the group, as did Sylvain Distin.

“Sylvain has benefitted a lot by being able to work in the warm weather, so we expect that he will be available to make the squad for Saturday.

“James McCarthy, in the same way, put in a lot of good work and in the next 48 hours we will know whether he will available to make the Crystal Palace game. I would be positive in saying James will be back in the squad very soon.

“Leon Osman and Steven Pienaar have a little bit of a longer term of rehabilitation. They have been progressing well and working hard individually. We will see how quickly they can recover but it is a bit of a longer period for them.”

Everton’s fans were very happy to learn that these players are doing much better, and are confident that the team will get a very big boost as soon as they return to action. Developments on the players – especially on Howard – will be closely monitored, and hopefully they’ll be in full health when they return to the pitch.