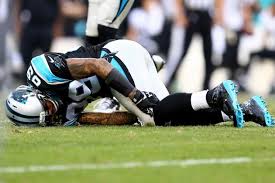 On Sunday, Dennis Pitta, TE for the Baltimore Ravens, went down after an injury that did not involve contact in his team’s game against the Cleveland Browns, and sports software services saw that the player’s right leg was immediately being worked on.

Pitta, who a season ago suffered from a dislocated hip, was carted off the field, and Aaron Wilson from The Baltimore Sun said that the injury was pretty “ugly”. It is not yet known when the player will return to action.

Sources reported that the player was sent to a local hospital.

Jason Kelce, center for the Philadelphia Eagles, left the team’s game against the Washington Redskins on Sunday during the third quarter due to an injury to the abdomen. Kelce turns out to be the third most important injury in Philadelphia’s offensive lineup. Evan Mathis was put on the injured reserve list, and was set to return in Week 1 after suffering from a sprained MCL. Since then, starting RT Allen Barbre was put on the sidelines due to a high ankle injury. Even though Kelce’s status is not known yet, sports software services can see that the player’s absence gives the offence a very big blow.

Vikings QB Matt Cassel left the game against the Saints on Sunday after suffering an injury to the toe. Rookie QB Teddy Bridgewater joined the game after the player’s injury. Minnesota announced that the QB won’t return to action.

Minnesota’s offense was stuck since their win against St. Louis on Week 1.

The Chargers’ backfield received a blow for the second week in a row. RB Danny Woodhead was sent off with an injury to his right ankle during San Diego’s first series against Buffalo on Sunday.

The Redskins announced that CB DeAngelo Hall was sent out for their whole game with what is believed to be a torn Achilles.

NFL fans can see that there are quite injuries in the game, and hope to see all of these players recover and return to action as soon as possible.