Ohio State should have no trouble beating Indiana 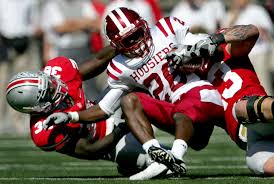 Ohio State were able to win eight games in a row ever since week two, when they were beaten by Virginia Tech, and these include a very difficult win on the road when they faced Michigan State, an opponent in the top 10. Internet bookmakers can see that the team is now moving into their year’s most important game in their efforts to make it to the playoffs. For Indiana, the year started 3-2 before they were defeated in their last five meetings.

The Buckeyes are 5th placed in the nation with their scoring offense, behind QB J.T. Barrett’s play, who is considered by many experts to surpass Braxton Miller in quality on the field. This year Barrett was able to pass for an amazing 2,356 yards, eight interceptions, and 29 TD’s , while the player rushed for 771 yards, scoring on nine other occasions. In college football, there were not a lot of players who were able to account for 38 TD’s for a team. Barrett is just behind RB Ezekiel Elliott‘s seven TD’s and 954 rushing yards in the running game for Ohio State. The QB’s top target was WR Michael Thomas, a player who is leading the team with only 35 catches made for 583 yards and eight TD’s, as WR Devin Smith has 564 yards and scored eight times.

Indiana saw their attack in the air fade away as QB Nate Sudfeld’s season is apparently over, and Zander Diamont – who does not have much experience at all – is now in action. Sudfeld was injured four meetings ago, and ever since then, Diamont was only able to pass for 282 yards with three picks and only one TD. The player was also only able to complete 47% of the passes that he made. Shane Wynn was the team’s only notable WR, as this year the player is leading the Hossiers with 43 catches made for 568 yards and three TD’s. RB Tevin Coleman is a very big reason why Indiana’s offense isn’t devastated, as the player leads the country’s 11th-best running game with 11 TD’s and 1,678 yards. A very good backup is RB D’Angelo Roberts, as he was able to record six TD’s and 460 yards.