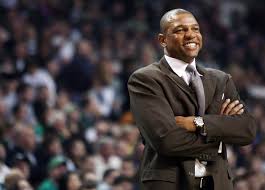 Price per head services learned that even though there was outrage from LA Lakers fans and at least one player, LA Clippers coach Doc Rivers said that the team did not mean to disrespect its rivals by covering up the Lakers’ championship banners and retired jerseys with seven giant banners of Clippers players during their games.

“The culture is changing, and we want to be a winner,” Rivers said on Monday. “To do that, we have to make changes, and the one at Staples Center is one that I thought we needed to make. We don’t leave the Lakers floor down, do we? And they don’t play on the Clippers floor; they take it up. That’s all.

“It’s no disrespect. I have an amazing amount of respect for the Lakers. Having said that, I work for the Clippers, and when we play, it should be the Clippers’ arena. I would say they probably feel the same way when they play. That’s all it is.”

Nick Young, first-year Lakers guard who two years ago played with the Clippers, and is a favourite with price per head services, took exception to the move.

“He can do that?” Young said. “For real? That’s disrespectful. We got to talk to Doc. He can’t have that. We got to do something about that.”

Rivers, who was the one who made the decision, is the team’s senior vice president of basketball operations and the Clippers’ head coach. Pay per head services can now see that instead of looking up at the Lakers’ retired jerseys and championship banners during Clippers home games, fans and players will now look up at oversized banners of J.J. Redick, Jamal Crawford, DeAndre Jordan, Blake Griffin, Jared Dudley, Matt Barnes and Chris Paul.

Price per head services saw that the banners made their debut during the team’s preseason game on Friday against the Portland Trail Blazers, and will be up for every next Clippers home game.

“It’s nothing against the Lakers,” Griffin said Monday. “It’s nothing to disrespect what they’ve done because those banners can never be removed or anything like that. It’s just that it’s our home arena when we’re there. That’s what that’s about. I thought it was a cool thing that [Doc] did.”