Price per Head: Herrera wants to stay at Bilbao 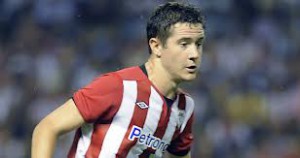 Price per head services found out that Ander Herrera spoke again about his desire to stay at Athletic Bilbao in the midst of ongoing speculation about his future at the club.

This season, the midfielder played a key role in helping Ernesto Valverde’s players to UEFA Champions League qualification, and pay per head services saw that last year the player was reportedly the subject of interest from Manchester United.

Rumours about the 24-year-old’s future continue to circulate, saying that he could leave the club, but Herrera said that he is happy to continue playing with the Basque outfit, and price per head services know that many fans don’t want to see him go anywhere.

“I have already made it clear, I don’t want to leave Athletic,” he is quoted as telling the Spanish media, and many fans were to delighted to learn that the player reiterated to will to stay at the club.

“We have a great team and we have worked really hard to get where we are. We have proven our level even without Fernando (Llorente) and Javi (Martinez).

“Above all else, Athletic and I are on the same path. This is where I belong, my place is here and I am very happy.”

Herrera also spoke about his desire to be part of Vicente Del Bosque’s Spain squad to go to Brazil for the FIFA World Cup next month, something that many fans and pay per head services would like to see happen.

“Some have said that Del Bosque may be interested in calling me up for the World Cup, that would make me happy,” he added.

“It would be a dream for me to go to the World Cup, but I know that it is extremely hard to get on the roster. The illusion is huge, so hopefully I will get in.”

Price per head services wonder what the future has in store for Herrera, and will continue to closely follow developments on the player.