Price per Head: Martino said that he was not mistreated at Barca 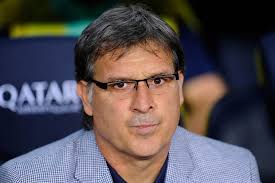 Price per head services learned that Gerardo Martino said that he was not mistreated at Barcelona, and that nobody at the club should apologise to him.

The Argentine manager’s future was put in question as Barca appeared to be in danger of ending the 2013-2014 season without winning a major trophy after losing the Copa del Rey final to Real Madrid as well as exiting the UEFA Champions League after being beaten by Atletico Madrid, and pay per head services could see that the fans were not very happy at all.

But the Catalan giants could clinch the crown, and price per head services believe that they could secure Martino’s future with two wins from their last two La Liga outings, away at Elche and then at home to title rivals Atletico.

Martino is adamant that no one at Camp Nou mistreated him, despite speculation.

“There is not a single act done by the club that has been out of order,” he said. “They haven’t done anything wrong.

“Not now and not during the 10 months I have been here so far. No one needs to apologise to me.”

Pay per head services were concerned when they saw that in recent weeks, Barca stuttered slightly, as they lost 1-0 at Granada before a home draw of 2-2 with Getafe, but their rivals’ wavering form kept them in with a chance of keeping the title.

“In the dressing room, with me at the head of it, we are our own biggest critics and we all know that we messed up last week,” added Martino.

“We have made mistakes, but it is harsh to say it has been down to irresponsibility.

“There are other deeds that could be described as irresponsible, but this is not one of them.

“Elche are a very strong team to be playing against. They still need a point or two to keep themselves up, but we now have a new opportunity to win La Liga.”

Price per head services can see that Martino is under a lot of pressure, and wonder if things will turn around for him and Barca.