Price per Head: Montoya says that Barca are mentally ‘screwed up 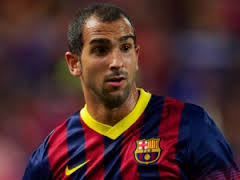 Martin Montoya, Barcelona defender, said that the Catalan giants are mentally “screwed up” after their 1-0 loss on Saturday to Granada, and price per head services can clearly see that the player is not very happy at all with the team.

Pay per head services saw that Gerardo Martino’s side had a terrible week after their loss at Estadio Nuevo Los Carmenes. They were also knocked out of the UEFA Champions League at the quarter-final stage by Atletico Madrid in the middle of the week.

Many fans and price per head services were concerned to see that the Spanish champions missed several first-team players, with Carles Puyol, Gerard Pique, Victor Valdes, and Marc Bartra all out, while Xavi, Dani Alves, Jordi Alba, and Alexis Sanchez were all benched.

Even though the proceedings were dominated by the visitors, pay per head services saw that a 16th-minute strike by Yacine Brahimi gave Granada a massive boost to their chances for survival, while providing a big blow to Barca’s title hopes – and Montoya admitted that he and his side were hurting.

“Mentally we’re pretty screwed up,” he told the club’s official website. “We could have won but we couldn’t capitalise on our chances. We gave it our all but in the end it wasn’t possible.

“We will fight for the league until the end, we still have games left and hopefully our rivals lose points.

“I ask the fans to support us on Wednesday (against Real Madrid in the Copa del Rey final. We want to dedicate a victory to them.”

And price per head services found out that midfielder Andres Iniesta agreed with the defender’s disappointment and said that they are currently moving backwards.

“Sometimes it’s hard to find an explanation, we did everything we could to score,” he said.

“It’s a step backward. We made a mistake in the play that led to their goal and that really hurt us.

“It hurts to take this backward step at this point in the league, when there’s so little left for the year to be over.”