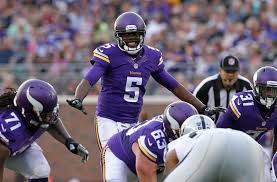 Vikings QB Teddy Bridgewater, whose left ankle was sprained, believes that he would have been able to hit the field if his team would have played Green Bay on Sunday, and not on Thursday. Now football betting fans can see that the player has no choice but to wait until October 12 for a return to action.

Bridgewater said that he doesn’t have a single doubt about being well enough to start against the Lions on October 12. Vikings coach Mike Zimmer said that the team is planning to start the player by then. However, as Christian Ponder is the one who is taking all of the snaps this week during practice, Minnesota decided to not to bring the player back only four days after he suffered the injury, which could put his ankle sprain at risk. Ponder was sacked on six occasions and two interceptions were thrown by him when Minnesota suffered their very disappointing loss to Green Bay 42-10.

The Vikings’ players were not very surprised at all by the team’s decision as Ponder was getting ready to start at QB throughout the week.

“Christian was taking a lot of snaps this week,” said WR Jarius Wright. “We kind of knew that we might be without Teddy.”

When the coach was asked if Bridgewater was pushing to play on Thursday, he said, “No. It wasn’t up to him. It was up to me.”

Minnesota’s decision to not let Bridgewater play was made after the rookie’s health for the long-term was taken into consideration, and football betting fans everywhere know very well that a player’s health always comes first.