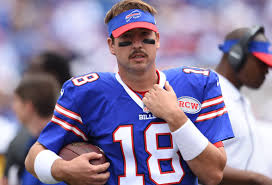 Bills fans and bookmaking software services were surprised to learn that the team made the decision to bench QB EJ Manuel on Monday so Kyle Orton could take his place, and on Thursday, the player spoke about how he wants to perform if he is to start for the team again.

“When I am out there, I want to be a different player,” said the player. “I just want to cut it loose, man, not hold myself back. Not to say I was, but I think at certain points in your career, in your manhood, you just open up and let it rip.

“You don’t worry about the repercussions. If something happens, at least you went down guns loaded, or guns blown, whatever. You just go out there and let it rip. That’s what I’ve been practicing out there this week, against our defense, so just allowing myself to go out and make plays naturally.”

Not many QB’s who were picked in the first round and were sent to the bench got to start again for the NFL. Manuel, who in 2013 was chosen as 16th overall, would like to change this.

The player did not mention the details of the conversation that he had with coach Doug Marrone on the reasons behind him going to the sidelines, but the player did speak about some areas of his game where he could make improvements.

“When this happened, obviously I was upset and frustrated. But at the same time, be a man, be a pro. I kicked up my work ethic even more,” said Manuel. “Be more consistent with everything: how the ball is coming out of my hands, my enunciation in the huddle, all those types of things.”

Bookmaking software services learned that there were some players in Buffalo’s locker room who were very surprised by the team’s decision to change QB’s this week, but on Wednesday, Sammy Watkins – rookie WR – said that Orton was already doing a very good job.

Manuel also mentioned that Orton was supporting him.

“I think it’s about the team. The team is bigger than I am,” said Manuel. “Whatever [Marrone] feels is best to help this team, we’ll go with it.”