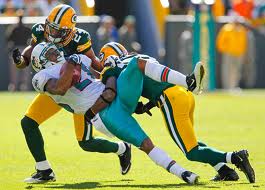 The Dolphins are 7-1 ATS and 5-3 SU on their last eight games when they played as the dogs at home, and this week, Miami (2-2) find themselves in that position as the home underdogs when they take on the Packers on Sunday, in a clash that football betting fans all of over the country can’t wait to see.

The Packers’ betting line opened up with the team being the favorites by three points. 49.5 was the total.

Green Bay were able to win two consecutive games both ATS and SU after they beat the Vikings 42-10 last Thursday. On offense, the Packers got a very big boost from RB Eddie Lacy, who was able to rush for 105 yards, helping Rodgers make some great performances.

NFL fans saw that from the moment that Green Bay were trailing the Bears two weeks ago at 17-14, to Thursday night, when an insignificant TD was scored by the Vikings in the game’s fourth quarter, the Packers had a run of 66-0. The team’s defense only has a ranking of 22nd place overall, but put their philosophy to very good use and were able to hold their past three opponents to a 46-point total.

Miami were able to bounce back from consecutive defeats when they took on the Bills and Chiefs, giving Oakland a very embarrassing 38-14 loss two weeks ago in London. The Dolphins were able to outrush the Raiders 157-53, made 278 passing yards, QB Ryan Tannehill scored twice, and they made four forced turnovers. Then the Dolphins were off last week.

In total offense, Miami’s ranking is at 15th place, but they’re fourth place when it comes to rushing, with 142 yards-per-game. Football betting fans can see that in the meantime, the team’s defense has a seventh overall ranking, and against the run they allow 107 yards-per-game and have a ranking of 13th. RB Knowshon Moreno is still out of the game due to an injury to the elbow, but Lamar Miller – his backup – has an average of 5.7 yards- per-carry this season so far.

The Lions get Prater to try to solve their kicking problems

DE Willie Young would like to play with Suh again