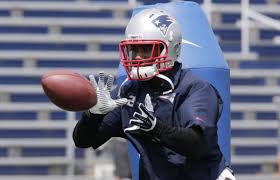 Sources reported that on Tuesday, Patriots CB Darrelle Revis was not able to practice with the team after coach Bill Belichick decided to send the player home after he showed up late, and the team’s football betting fans hope that he doesn’t do this again, as there is no way that the team can benefit from this – especially with a season that isn’t proving to be particularly easy.

After the Patriots’ game against the Jets on Thursday night, the players were off for the weekend before Tuesday’s return to practice. They were set to gather at 7:30am so they could hold meetings, and apparently the player did not show up on time, although it isn’t known how late the player was.

On Wednesday, the famous CB was asked about what happened in the team’s locker room.

“Between me and Coach,” said Revis. “Talk to him about it.”

The coach was not asked about the player being absent from practice in a news conference that took place on Wednesday.

According to the report, the CB was fine with the fact that he wasn’t allowed to practice, and is aware that he is no exception when it comes to Belichick’s rules regarding tardiness. The coach sent players home before, and these include WR Randy Moss and former LB Adalius Thomas.

LB Brandon Spikes was the most recent member of the team to go home for showing up late. He’s now playing with the Bills. He wasn’t able to practice after making it late to a meeting in the midst of a very heavy blizzard. When the incident took place, the player released a tweet that showed a picture of his car, which was covered in snow.

The Patriots are holding practice four days this week instead of three because the team have a longer week to get ready for the game taking place against the Bears this Sunday. New England didn’t have to explain the reasons behind their players being absent or release an injury report for the team’s practice on Tuesday.

But Revis’ fans were pleased and relieved to learn that on Wednesday, the player was wearing full pads during practice.

New England’s football betting fans believe that the player should seriously consider getting his act together – especially with the team having a bit of a tricky season, and hope that an incident regarding tardiness does not happen again.