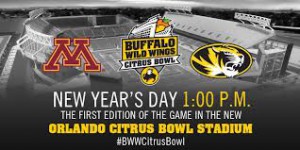 Missouri and Minnesota are getting ready to go head-to-head in Orlando on the first day of the New Year, with pay per head agents anticipating a very exciting clash between the Tigers and the Golden Gophers.

The Tigers have a national ranking of 16th place, and in the SEC Championship Game they were beaten by the Alabama Crimson Tide. For the second year in a row, Gary Pinkel went to Atlanta, but again he fell short.

QB Maty Mauk is the one who’s leading the team’s offense, even though all season his play was not very consistent at all. This season, he was only able to complete 52.9% of his passes made for 2,551 yards, along with 23 TD’s and 11 picks.

In their air game, WR Bud Sasser – who’s a favorite with many fans – is Mauk’s top target, as the player was able to catch 70 passes made for 935 yards, to go along with 10 TD’s. When it comes to their ground game, RB Russell Hansbrough, who recorded 970 yards and 9 TD’s, and RB Marcus Murphy, with 767 yards and 4 TD’s, are the ones to lead a 10-3 Missouri side.

The Golden Gophers were one of the year’s biggest surprises, and fans everywhere could clearly see this. Coach Jerry Kill had Minnesota right in Big Ten contention until the regular season’s last game. The team ended the season at 8-4, with ranked teams beating them in three of those matchups.

For the most part, the Gophers’ offense has a single dimension, but it comes in the form RB David Cobb, who this season was able to rush for 1,548 yards and 13 TD’s.

QB Mitch Leidner is much more threatening in running than in passing. Pay per head agents saw that this season, Leidner was able to rush for 462 yards and 10 TD’s, while he passed for 1,540 yards with 10 TD’s and 8 picks.

The Gophers were able to beat the teams that they took on thanks to their very good defense by knowing how to properly run the ball, and this happens to be same way that the Tigers enjoy beating their opponents, so for this game, the team with a better areal game might be the one to have an advantage in the Buffalo Wild Wings Citrus Bowl, and fans all over the country can’t wait to see what will ultimately happen on the field when both teams square off.

Stanford should be able to take out Maryland